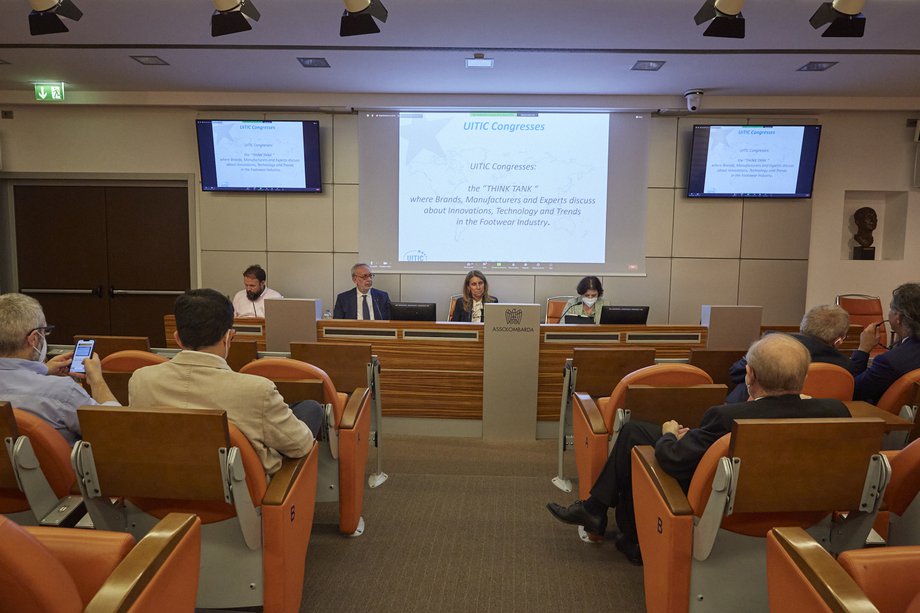 THE PARTNERSHIP BETWEEN ASSOMAC AND UITIC

Milan, 29th June 2022. A prestigious partnership between Assomac and UITIC has been announced today, during the press conference held in Milan at the Assolombarda venue, in front of a large number of participants.

The First Step of this partnership between the National Association of Italian Manufacturers of Footwear, Leathergoods and Tanning Technologies – that from 1982 is the main supplier of the best technology for production, with a consolidate presence in about 100 Countries, with 130 Italian Associated Companies and a “export driven” mission – and the International Union of Shoe Industry Technicians – UITIC, founded in 1972, with associated members in 27 Countries, and with the aim at developing and promoting the Footwear Industry technical knowledge, mainly thank to the organization of the Worldwide Congress- will be the presence and joint participation at the international Exhibition “Simac Tanning Tech”, that will be held from 20 to 22 September at Fiera Milano Rho (MI).

"If the international scenario forced us to review the very essence of the events, Simac Tanning Tech was not caught unprepared and rethought redefined its organizational and offer model in an increasingly strategic key, transforming itself into a international networking hub with an international whose highlights are fundamental for the reference sector and for its protagonists "

stated Maria Vittoria Brustia, President of Assomac Servizi – organizer of the Simac Tanning Tech – describing the activities planned for the next edition of the Fair.

From the launch of the “Communication platform” of Simac Tanning Tech (news.simactanningtech.it), to the important panels of speakers that will join through their contribution to the workshops and Talks held in the pavilions of the Fair, and the fundamental role of the partnerships like that one with ITA Agency, that will allow Simac Tanning Tech to welcome commercial “delegates” coming from all over the World and with SPS Italiafor the co-design of the “Innovation Corner” dedicated to the technologies that able the Industry 4.0 in the Sectors; partnerships that have helped Simac Tanning Tech growing rapidly.

everything is based on two main keywords: Network, which essential for making the Fair a community, and Collaboration among all the stakeholders, to make Simac Tanning Tech the technological platform of the fashion system.

"September appointment will be a natural landing for UITIC, that will find its first expression and, above all, a suitable stage to promote the goal that unites us: to spread and create an open and shared system in order to support the single institutions in their growth, with a fairly competitive and collaborative tension at the same time " Concluded Maria Vittoria Brustia.

Simac Tanning Tech is not the only objective of this partnership; Assomac and UITIC will also collaborate at the realization of the “21st International Footwear Congress”, the World Convention of footwear technology to be held in 2023 between Milan and Vigevano.

Yves Morin, President of UITIC, has explained the long heritage, the experiences and the international network gained and performed in the UITIC activities and the reasons that led to the synergy between the World Congress and the Simac Tanning Tech:

"UITIC members are delighted to join forces with such a prestigious Italian partner as ASSOMAC for the organization of the 21st "UITIC International Footwear Congress.

We always choose the best partner for the organization of our congresses, in 2013 in China, it was the CLIA (China Leather Industry Association) in 2016 in India, the CLE (Council for Leather Exports) in 2018 in Portugal, APPICAPS (the Portuguese Footwear and Leather Goods Association)" - Said Mr. Morin.

“Our Executive Committee is very enthusiastic about the idea of organizing our 21st “UITIC International Footwear Congress” in Italy, a country which is an undisputed reference in terms of innovation and technology for the leather and footwear industry."

"We couldn't have wished for a better destination than Italy for the restart of our UITIC congresses."

This 21st "UITIC International Footwear Congress” will be a remarkable event due to its simultaneous organization with the famous "Simac Tanning Tech" exhibition."

We are putting energy into the preparation of this 21st Congress which will also allow us to celebrate 50 years of UITIC.

It will be very exciting to meet again at our 21st UITIC Congress after 5 years of absence, in addition we have not been in Italy since 1999 during our 13th Congress in Fermo and our 6th Congress in Milan in 1983!"

And Sergio Dulio, member of the UITIC Executive Committee and part of the ITA UITIC TASK Force, has showed “what news” on the program proposal and explained the topic of interest of the “21st UITIC International Congress Milano and Vigevano”.

In UITIC 2023 we want to expose the footwear world with all the most important technological evolutions and trends that can affect the way shoes are designed and manufactured. We have prepared a conference program that covers all the relevant topics from sustainability to digital transformation, to logistic and supply chains, with a special focus on the human capital of tomorrow; a program that is further enhanced by the contribution of selected keynote speakers and anticipated by a pre-conference calendar with a mix a factory and “inspirational” tours. It will be an unmissable occasion to reconnect and to update. – affirmed Sergio Dulio.

"Despite the uncertainties and risks that the market is experiencing, with the challenges that the international scenario presents to us, the companies of our territories have what it takes to face the current difficult context, and, when necessary, reposition themselves on new markets” - stated Veronica Squinzi, - “it is an important fact that 12% of national exports are made in the Provinces of Milan, Lodi, Monza Brianza and Pavia, the territories of Assolombarda. This is worth of 64 billion euros in 2021.

Mechanics, Metals and Fashion are the driving sectors of manufacturing at a national level and those supply chains demonstrate our strength and the ability of Italian Companies to penetrate foreign markets, where the companies in Lombardy represent the top of our global presence ".

Roberto Luongo, General Director of ITA Agency, spoke at the Press Conference, underlined that: “ICE's relationship with Assomac is a proven relationship.

For years, the Agency has been pleased to contribute to the success of Simac Tanning Tech, the most important international trade fair in the industry of Footwear and Leather processing, and the only fair with machineries “in action”. As per the past edition, ITA Agency is planning communication initiatives and, the Agency will carry in Italy a large delegation with more than 100 commercial partners and journalists from 19 countries that we considered strategic for the industries. A Sector that in the first quarter of 2022 recorded a + 8.7% compared to the same period. of 2021.

In this way, ICE is committed to support the Exhibition in becoming a highly qualified “Technology of Made in Italy Showcase event”, in a public-private partnership synergy, which is highly fundamental to host and manage the World Footwear Congress in Italy, expected in September 2023 ".

We welcome all of you to Simac Tanning Tech, from 20th to 22nd September 2022, at Fiera Milano Rho, and be prepared for the anticipation of the 21st UITIC International Congress!

National Association of manufacturers of technologies for Footwear, Leathergoods and Tanning, in Confindustria field, represents Italian footwear and tanning machinery, protecting interests of associated companies and promoting their activities on a national and international level. The main objective of the Association is the elaboration of sectorial politics able to enrich and develop the Italian know-how, promoting Associated companies.

Simac Tanning Tech is the international event with the most qualified offer of machinery and technologies for the footwear, leather goods and tanning industries, which takes place in Milan, concurrently with Lineapelle.

There are many services dedicated exclusively to the visitor, allowing greater enjoyment range of merchandise, ease in the movements, better planning of the stay during the exhibition and a wider range of entertainment in the city.

The event, reserved for the sector operators, will be held from 20 to 22 September 2022 at Milano Fiera Rho.

The International Union of Shoe Industry Technicians (UITIC), established in 1972, is an organization which aims at developing technical knowledge in the footwear industry, in particular by organizing international conferences on a regular basis and by taking the initiative in setting up information exchanges between its members, mainly in the field of technology.

UITIC’s main activity is to organize the most prestigious meeting of experts in the world, the "UITIC International Footwear Congress". This event tackles the latest technical problems or innovation in the footwear industry. Visits of footwear factories and related industries are organized before the Congress.